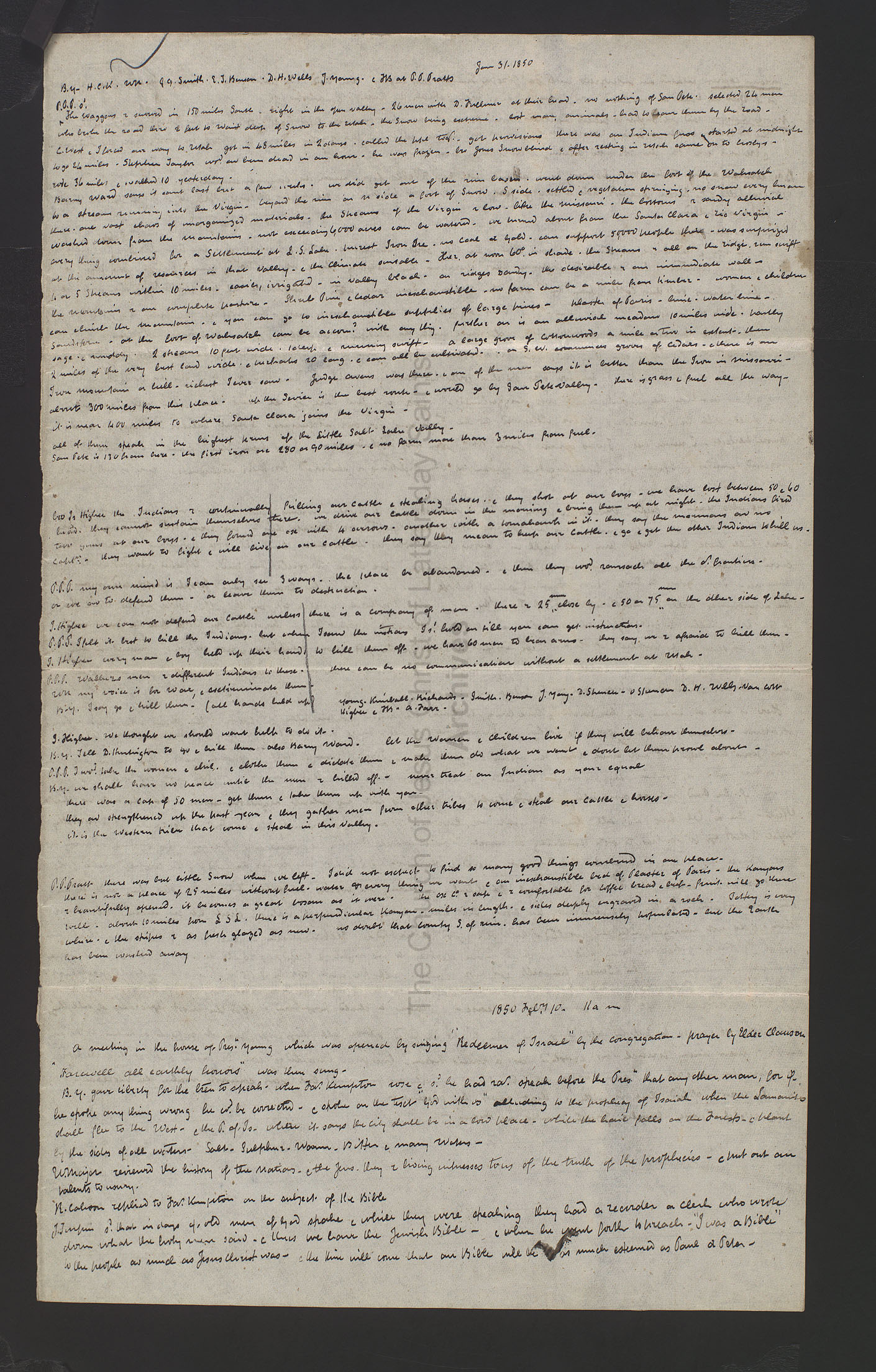 Words in [brackets] are questionable/unreadable

[Barney] Ward says it could last but a few weeks.  We did get out of the [ruin cashes]. Went down under the foot of the Wahsatch (sic) to a stream running into the Virgin beyond the ruins on N side a foot of snow. S side settled with vegetation [stringing]. No snow every [human] [?] are vast [chaos or shows] of unorganized materials.  The streams of the Virgin are low – like the Missouri.  The [Cottons] are sandy [alluvial] washed down from the mountains – not [exceeding] 6,000 acres can be watered.  We know about from the Santa Clara and Rio Virgin ~ everything combined for a settlement at G.S.Lake. [Invest] iron ore.  No coal or gold.  Can support 50,000 people there – was surprised of the amount of resources in that valley – with the climate amiable.  Temp at noon 60 degrees in shade.  The streams are all on the [ridges] run swift 10 or 5 streams within 10 miles.  Easier, irrigated – in valley [block] – on ridges sandy. The desirable are an immediate wall –  the [reforming/reconstruction?] our complete pasture.  Shrub pine with cedar inexhaustible.  No farm can be a mile from timber.  Women and children can climb the mountains and you can go to inexhaustible supplies of large pines – plaster of paris – [?] . Water line –  sound [?].  At the foot of Wahsatch can be acorn?  With anything. Further as is an alluvial meadows 10 miles wide.  [Hardy?] sage and muddy.  2 streams 10 feet wide.  [?] and running swift – a large grove of cottonwoods a mile or two in expanse then 2 miles of the very best land wide.  Orchards 20 long and can all be cultivated.  On S.W. comes groves of cedars  – there is an Iron mountain or hill – richest I ever saw.  Judge Owens was there and are of the [?] says it is better than the iron in Missouri – about 300 miles from this place.  If the Sevier is the best route and would go by San Pete valley.  There is grass and field all the way – it is near [1200?] miles to where Santa Clara joins the Virgin.

All of them spreads in the highest [hills? Lands?] of the Little Salt Lake Valley.

Bro I. Higbee – The Indians are continually killing our cattle and stealing horses and they shot at our boys.  We have heard they cannot sustain themselves there.  We drive our cattle down in the morning and bring them up at night.  The Indians fired two guns at our boys and they found one ox with 4 arrows.  Another with a tomahawk in it.  They say the Mormons own no cattle.  They want to fight and will live on our cattle.  They say they mean to [help?hurt?] our cattle and go and get the other Indians to kill us.

P.P.P. – my own mind is I can only see 3 ways. The place be abandoned and then they [would] ransack all the S. frontiers – or we are to defend them – or leave them to destruction.

P.P.P – I felt it is best to kill the Indians.  But when I saw the [?] Js! lived an kill you can get instructions.

P.P.P – Walkers men are different Indians to these.  There can be no communication without a settlement at Utah. [?] my voice is for war, and exterminate them.

B.Y. – Tell D. Huntington to go and kill them also [many] ward.  Let the women and children live if they will behave themselves.

P.P.P. – I [say] take the women and children and clothe them and [?] them and make them do what we want and don’t let them prowl about.

B.Y. We shall have no peace until the men are killed off.  Never treat an Indian as your equal.  There was a [camp] of 50 men – get them and take them up with you. They [as] strengthened up the past year and they gather men from other tribes to come and steal our cattle and horses. It is the western tribes that come and steal in this valley.

P.P.Pratt – There was but little snow when we left.  I did not expect to find so many things convened in our place. There is not a place of 25 miles without fuel.  Water for everything we want and our inexhaustible bed of plaster of paris. We’ll go there well – about 10 miles from GSL.  There is a [?] under [Kanyon] – miles in length and sides deeply engraved in a rock.  [?] is every where and the stripes are as fresh glazed as new.  No doubt that county S of min. Has been immensely populated and the south has been washed away.

I am text block. Click edit button to change this text.