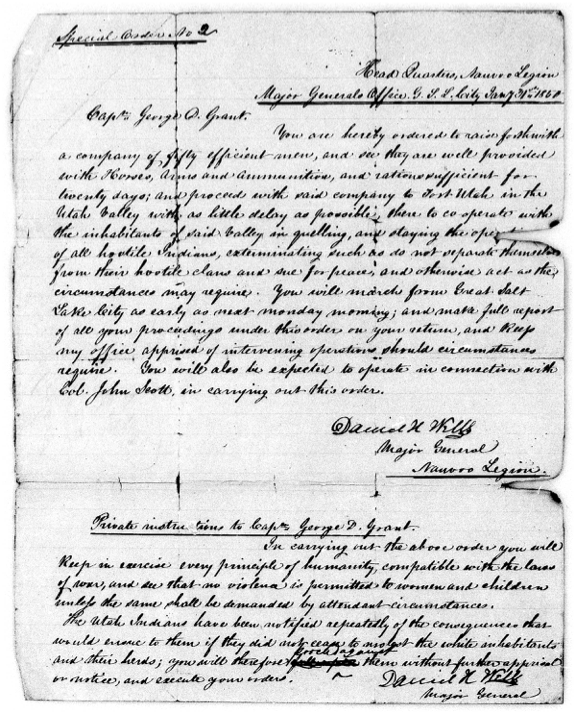 You are hereby ordered to raise forthwith a company of fifty efficient men, and see they are well provided with horses, arms and ammunitions, and rations sufficient for twenty days; and proceed with said company to Fort Utah in the Utah Valley with as little delay as possible, there to co-operate with the inhabitants of said valley in quelling, and staying the ope*[rations] of all hostile Indians, exterminating such as do not separate themselves from their hostile clans and sue for peace, and otherwise act as the circumstances may require.  You will march from Great Salt Lake City as early as next Monday morning; and make full report of all your proceedings under this order on your return, and keep my office apprised of intervening operations should circumstances require.  You will also be expected to operate in connection with Col. John Scott, in carrying out this order.

In carrying out the above order you will keep in exercise every principle of humanity compatible with the laws of war, and see that no violence is permitted to women and children unless the same shall be demanded by attendant circumstances.

The Utah Indians have been notified repeatedly of the consequences that would come** to them if they did not cease to molest the white inhabitants and their herds; you will therefore perch** against them without further appraisal or notice, and execute your orders.