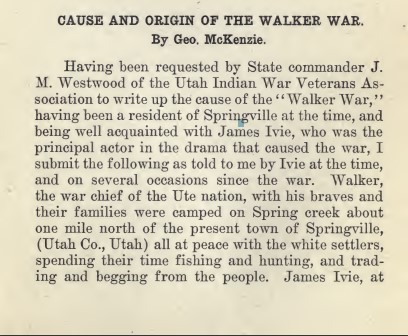 Cause and Origin of the Walker War

Museum Exhibits Utah History Cause and Origin of the Walker War 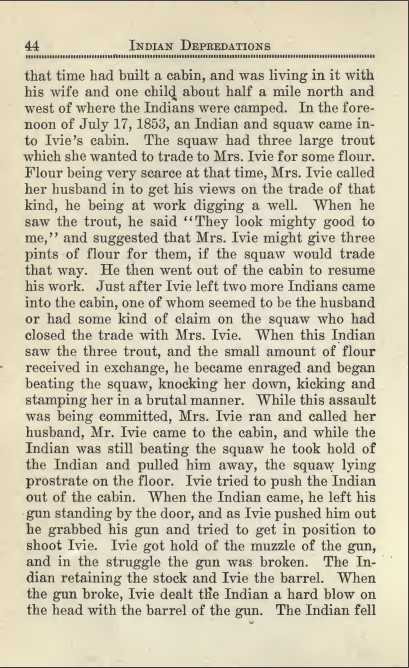 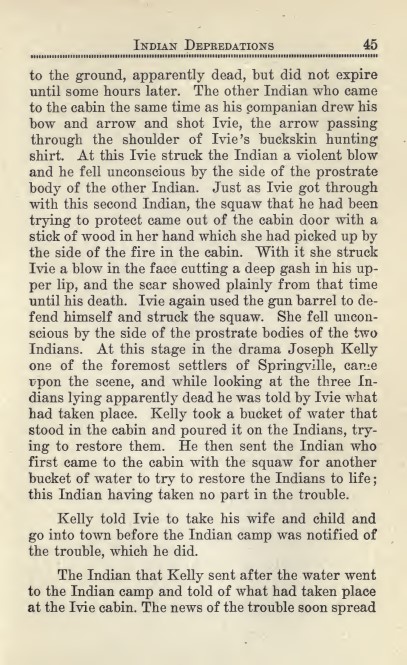 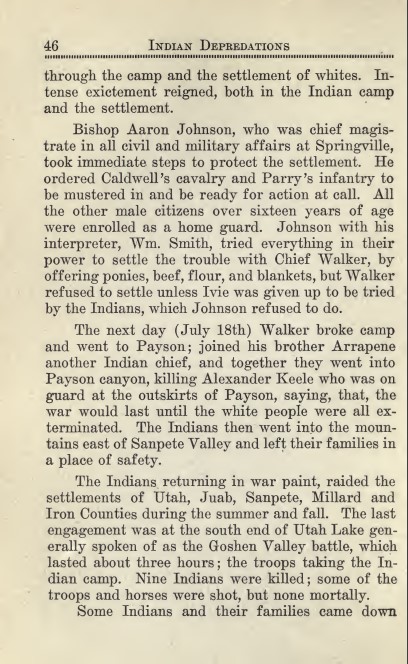 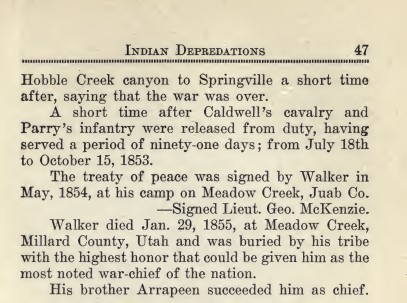 CAUSE AND ORIGIN OF THE WALKER WAR.

Having been requested by State commander J. M. Westwood of the Utah Indian War Veterans Association to write up the cause of the ‘ l Walker War, ‘ ‘ having been a resident of Springville at the time, and being well acquainted with James Ivie, who was the principal actor in the drama that caused the war, I submit the following as told to me by Ivie at the time, and on several occasions since the war. Walker, the war chief of the Ute nation, with his braves and their families were camped on Spring creek about one mile north of the present town of Springville, (Utah Co., Utah) all at peace with the white settlers, spending their time fishing and hunting, and trading and begging from the people. James Ivie, at that time had built a cabin, and was living in it with his wife and one chilol about half a mile north and west of where the Indians were camped. In the fore- noon of July 17, 1853, an Indian and squaw came into Ivie’s cabin. The squaw had three large trout which she wanted to trade to Mrs. Ivie for some flour. Flour being very scarce at that time, Mrs. Ivie called her husband in to get his views on the trade of that kind, he being at work digging a well. When he saw the trout, he said “They look mighty good to me,” and suggested that Mrs. Ivie might give three pints of flour for them, if the squaw would trade that way. He then went out of the cabin to resume his work. Just after Ivie left two more Indians came into the cabin, one of whom seemed to be the husband or had some kind of claim on the squaw who had closed the trade with Mrs. Ivie. When this Indian saw the three trout, and the small amount of flour received in exchange, he became enraged and began beating the squaw, knocking her down, kicking and stamping her in a brutal manner. While this assault was being committed, Mrs. Ivie ran and called her husband, Mr. Ivie came to the cabin, and while the Indian was still beating the squaw he took hold of the Indian and pulled him away, the squaw lying prostrate on the floor. Ivie tried to push the Indian out of the cabin. When the Indian came, he left his gun standing by the door, and as Ivie pushed him out he grabbed his gun and tried to get in position to shoot Ivie. Ivie got hold of the muzzle of the gun, and in the struggle the gun was broken. The Indian retaining the stock and Ivie the barrel. When the gun broke, Ivie dealt tBe Indian a hard blow on the head with the barrel of the gun. The Indian fell to the ground, apparently dead, but did not expire until some hours later. The other Indian who came to the cabin the same time as his companian drew his bow and arrow and shot Ivie, the arrow passing through the shoulder of Ivie’s buckskin hunting shirt. At this Ivie struck the Indian a violent blow and he fell unconscious by the side of the prostrate body of the other Indian. Just as Ivie got through with this second Indian, the squaw that he had been trying to protect came out of the cabin door with a stick of wood in her hand which she had picked up by the side of the fire in the cabin. With it she struck Ivie a blow in the face cutting a deep gash in his upper lip, and the scar showed plainly from that time until his death. Ivie again used the gun barrel to defend himself and struck the squaw. She fell unconscious by the side of the prostrate bodies of the two Indians. At this stage in the drama Joseph Kelly one of the foremost settlers of Springvllle, came rpon the scene, and while looking at the three Indians lying apparently dead he was told by Ivie what had taken place. Kelly took a bucket of water that stood in the cabin and poured it on the Indians, trying to restore them. He then sent the Indian who first came to the cabin with the squaw for another bucket of water to try to restore the Indians to life ; this Indian having taken no part in the trouble.

Kelly told Ivie to take his wife and child and go into town before the Indian camp was notified of the trouble, which he did.

Bishop Aaron Johnson, who was chief magistrate in all civil and military affairs at Springville, took immediate steps to protect the settlement. He ordered Caldwell’s cavalry and Parry ‘s infantry to be mustered in and be ready for action at call. All the other male citizens over sixteen years of age were enrolled as a home guard. Johnson with his interpreter, Wm. Smith, tried everything in their power to settle the trouble with Chief Walker, by offering ponies, beef, flour, and blankets, but Walker refused to settle unless Ivie was given up to be tried by the Indians, which Johnson refused to do.

The next day (July 18th) Walker broke camp and went to Payson; joined his brother Arrapene another Indian chief, and together they went into Payson canyon, killing Alexander Keele who was on guard at the outskirts of Payson, saying, that, the war would last until the white people were all ex- terminated. The Indians then went into the mountains east of Sanpete Valley and left their families in a place of safety.

The Indians returning in war paint, raided the settlements of Utah, Juab, Sanpete, Millard and Iron Counties during the summer and fall. The last engagement was at the south end of Utah Lake generally spoken of as the Goshen Valley battle, which lasted about three hours; the troops taking the Indian camp. Nine Indians were killed; some of the troops and horses were shot, but none mortally.

Some Indians and their families came down Hobble Creek canyon to Springville a short time after, saying that the war was over.

A short time after CaldwelPs cavalry and Parry’s infantry were released from duty, having served a period of ninety-one days ; from July 18th to October 15, 1853.

The treaty of peace was signed by Walker in May, 1854, at his camp on Meadow Creek, Juab Co.

Walker died Jan. 29, 1855, at Meadow Creek, Millard County, Utah and was buried by his tribe with the highest honor that could be given him as the most noted war-chief of the nation.

His brother Arrapeen succeeded him as chief.