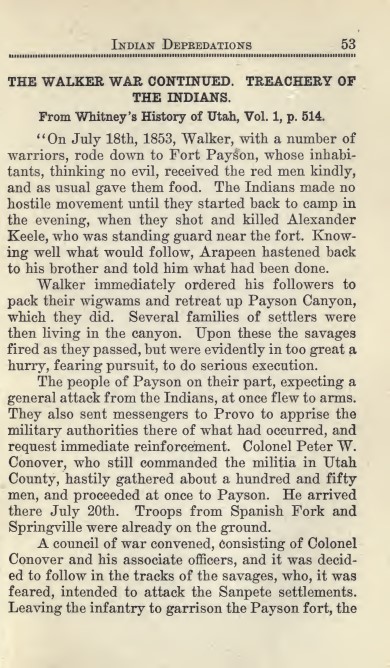 The Walker War Continued Treachery of the Indians 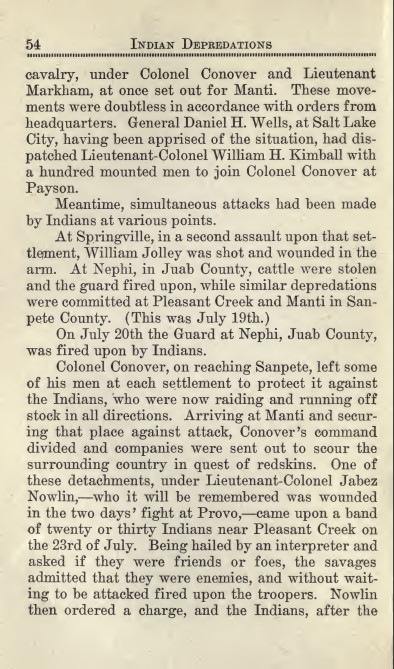 THE WALKER WAR CONTINUED. TREACHERY OF THE INDIANS.

“On July 18th, 1853, Walker, with a number of warriors, rode down to Fort Payson, whose inhabitants, thinking no evil, received the red men kindly, and as usual gave them food. The Indians made no hostile movement until they started back to camp in the evening, when they shot and killed Alexander Keele, who was standing guard near the fort. Knowing well what would follow, Arapeen hastened back to his brother and told him what had been done.

Walker immediately ordered his followers to pack their wigwams and retreat up Payson Canyon, which they did. Several families of settlers were then living in the canyon. Upon these the savages fired as they passed, but were evidently in too great a hurry, fearing pursuit, to do serious execution.

The people of Payson on their part, expecting a general attack from the Indians, at once flew to arms. They also sent messengers to Provo to apprise the military authorities there of what had occurred, and request immediate reinforcement. Colonel Peter W. Conover, who still commanded the militia in Utah County, hastily gathered about a hundred and fifty men, and proceeded at once to Payson. He arrived there July 20th. Troops from Spanish Fork and Springville were already on the ground.

A council of war convened, consisting of Colonel Conover and his associate officers, and it was decided to follow in the tracks of the savages, who, it was feared, intended to attack the Sanpete settlements. Leaving the infantry to garrison the Payson fort, the cavalry, under Colonel Conover and Lieutenant Markham, at once set out for Manti. These movements were doubtless in accordance with orders from headquarters. General Daniel H. Wells, at Salt Lake City, having been apprised of the situation, had dispatched Lieutenant-Colonel William H. Kimball with a hundred mounted men to join Colonel Conover at Payson.

Meantime, simultaneous attacks had been made by Indians at various points.

At Springville, in a second assault upon that set- tleiment, William Jolley was shot and wounded in the arm. At Nephi, in Juab County, cattle were stolen and the guard fired upon, while similar depredations were committed at Pleasant Creek and Manti in Sanpete County. (This was July 19th.)

On July 20th the Guard at Nephi, Juab County, was fired upon by Indians.

Colonel Conover, on reaching Sanpete, left some of his men at each settlement to protect it against the Indians, who were now raiding and running off stock in all directions. Arriving at Manti and secur- ing that place against attack, Conover ‘s command divided and companies were sent out to scour the surrounding country in quest of redskins. One of these detachments, under Lieutenant-Colonel Jabez Nowlin, who it will be remembered was wounded in the two days ‘ fight at Provo, came upon a band of twenty or thirty Indians near Pleasant Creek on the 23rd of July. Being hailed by an interpreter and asked if they were friends or foes, the savages admitted that they were enemies, and without waiting to be attacked fired upon the troopers. Nowlin then ordered a charge, and the Indians, after the first fire, broke and fled, leaving six or seven of their number dead upon the field. Nowlin’s com- pany sustained no loss.

Colonel Conover now dispatched messengers to request further orders from General Wells. The messengers sent were Clark Roberts of Provo, and John W. Berry of Spanish Fork. Leaving Manti in the afternoon on the 23rd, they reached Summit Creek Santaquin in Utah County, next morning. They found the place deserted, the settlers, fearing attack and massacre, having sought safety at Payson. As the messengers rode through the town they were fired upon by twenty-one Indians concealed in some houses. Berry was shot in the left wrist, and Roberts through the shoulder. Putting spurs to their horses they rode at full speed toward Payson, hotly pursued by the Indians, from whom, however, they suc- ceeded in escaping. “