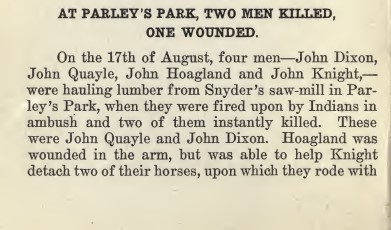 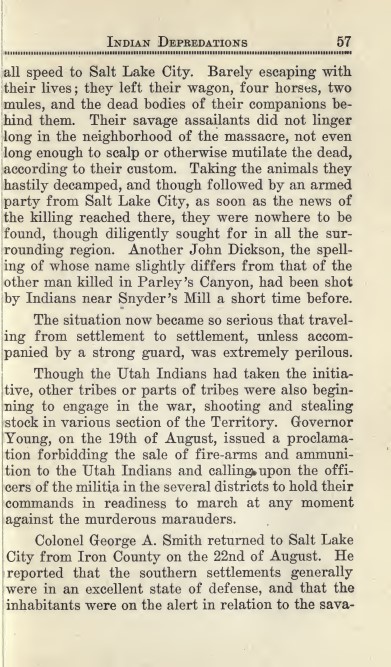 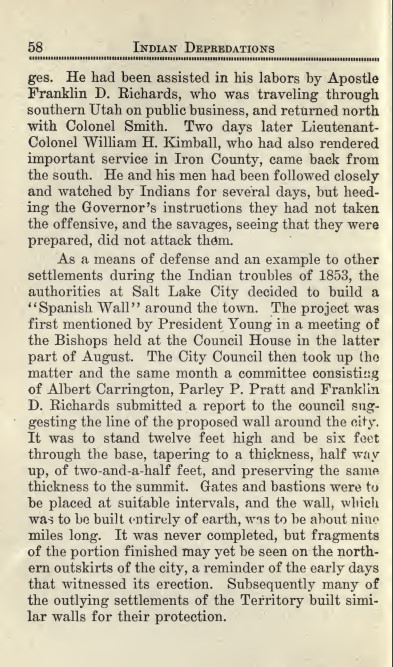 On the 17th of August, four men John Dixon, John Quayle, John Hoagland and John Knight, were hauling lumber from Snyder’s saw-mill in Parley’s Park, when they were fired upon by Indians in ambush and two of them instantly killed. These were John Quayle and John Dixon. Hoagland was wounded in the arm, but was able to help Knight detach two of their horses, upon which they rode with all speed to Salt Lake City. Barely escaping with their lives; they left their wagon, four horses, two mules, and the dead bodies of their companions behind them. Their savage assailants did not linger long in the neighborhood of the massacre, not even long enough to scalp or otherwise mutilate the dead, according to their custom. Taking the animals they hastily decamped, and though followed by an armed party from Salt Lake City, as soon as the news of the killing reached there, they were nowhere to be found, though diligently sought for in all the sur- rounding region. Another John Dickson, the spelling of whose name slightly differs from that of the i other man killed in Parley ‘s Canyon, had been shot | by Indians near Snyder’s Mill a short time before.

The situation now became so serious that travelling from settlement to settlement, unless accompanied by a strong guard, was extremely perilous.

Though the Utah Indians had taken the initiative, other tribes or parts of tribes were also beginning to engage in the war, shooting and stealing I stock in various section of the Territory. Governor Young, on the 19th of August, issued a proclamajtion forbidding the sale of fire-arms and ammunition to the Utah Indians and calling upon the offi- cers of the militia in the several districts to hold their commands in readiness to march at any moment against the murderous marauders.

Colonel George A. Smith returned to Salt Lake City from Iron County on the 22nd of August. He I reported that the southern settlements generally I were in an excellent state of defense, and that the inhabitants were on the alert in relation to the sava- ges. He had been assisted in his labors by Apostle Franklin D. Richards, who was traveling through southern Utah on public business, and returned north with Colonel Smith. Two days later LieutenantColonel William H. Kimball, who had also rendered important service in Iron County, came back from the south. He and his men had been followed closely and watched by Indians for several days, but heeding the Governor’s instructions they had not taken the offensive, and the savages, seeing that they were prepared, did not attack thdm.

As a means of defense and an example to other settlements during the Indian troubles of 1853, the authorities at Salt Lake City decided to build a “Spanish Wall” around the town. The project was first mentioned by President Young in a meeting of the Bishops held at the Council House in the latter part of August. The City Council then took up the matter and the same month a committee consisting of Albert Carrington, Parley P. Pratt and Franklin D. Richards submitted a report to the council suggesting the line of the proposed wall around the city. It was to stand twelve feet high and be six feet through the base, tapering to a thickness, half way up, of two-and-a-half feet, and preserving the same thickness to the summit. Gates and bastions were to “be placed at suitable intervals, and the wall, which was to be built entirely of earth, was to be about nino miles long. It was never completed, but fragments of the portion finished may yet be seen on the north- ern outskirts of the city, a reminder of the early days that witnessed its erection. Subsequently many of the outlying settlements of the Territory built similar walls for their protection.