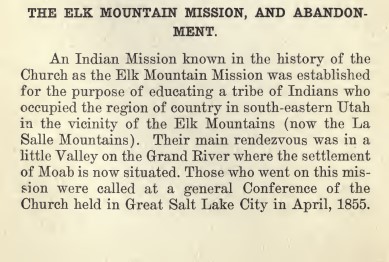 The Elk Mountain Mission, and Abandonment 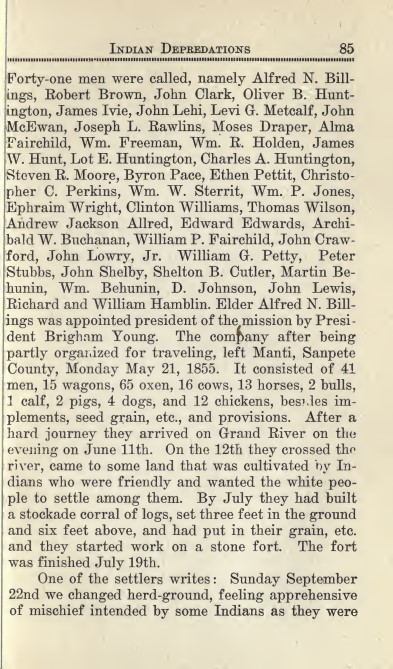 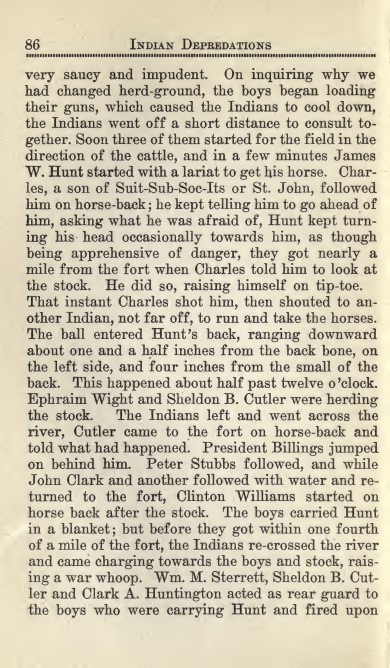 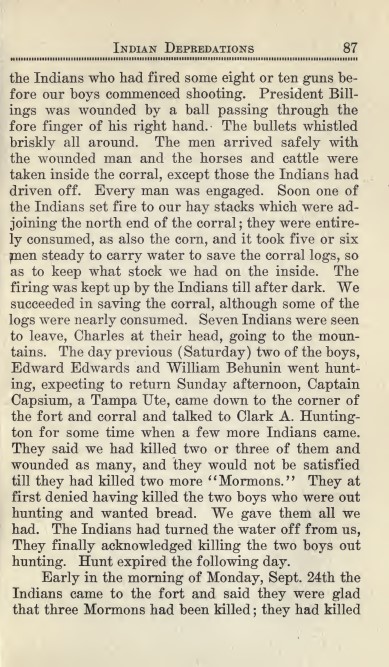 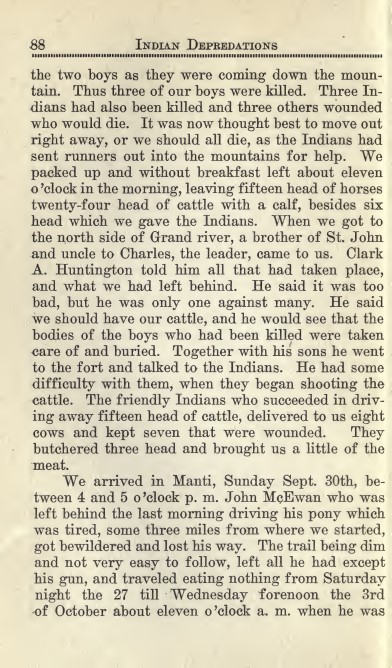 THE ELK MOUNTAIN MISSION, AND ABANDONMENT.

An Indian Mission known in the history of the Church as the Elk Mountain Mission was established for the purpose of educating a tribe of Indians who occupied the region of country in south-eastern Utah in the vicinity of the Elk Mountains (now the La Salle Mountains). Their main rendezvous was in a little Valley on the Grand River where the settlement of Moab is now situated. Those who went on this mission were called at a general Conference of the Church held in Great Salt Lake City in April, 1855. Forty-one men were called, namely Alfred N. Billngs, Robert Brown, John Clark, Oliver B. Huntngton, James Ivie, John Lehi, Levi G. Metcalf, John McEwan, Joseph L. Eawlins, Moses Draper, Alma Fairchild, Wm. Freeman, Wm. R. Holden, James W. Hunt, Lot E. Huntington, Charles A. Huntington, Steven R. Moore, Byron Pace, Ethen Pettit, Christopher C. Perkins, Wm. W. Sterrit, Wm. P. Jones, Ephraim Wright, Clinton Williams, Thomas Wilson, Andrew Jackson Allred, Edward Edwards, Archibald W. Buchanan, William P. Fairchild, John Crawford, John Lowry, Jr. William G. Petty, Peter Stubbs, John Shelby, Shelton B. Cutler, Martin Behunin, Wm. Behunin, D. Johnson, John Lewis, “Richard and William Hamblin. Elder Alfred N. Billings was appointed president of the mission by President Brigham Young. The company after being partly organized for traveling, left Manti, Sanpete County, Monday May 21, 1855. It consisted of 41 men, 15 wagons, 65 oxen, 16 cows, 13 horses, 2 bulls, 1 calf, 2 pigs, 4 dogs, and 12 chickens, besides implements, seed grain, etc., and provisions. After a hard journey they arrived on Grand River on the evening on June llth. On the 12th they crossed tho river, came to some land that was cultivated “by Indians who were friendly and wanted the white people to settle among them. By July they had built a stockade corral of logs, set three feet in the ground and six feet above, and had put in their grain, etc. and they started work on a stone fort. The fort was finished July 19th.

One of the settlers writes : Sunday September 22nd we changed herd-ground, feeling apprehensive of mischief intended by some Indians as they were very saucy and impudent. On inquiring why we had changed herd-ground, the boys began loading their guns, which caused the Indians to cool down, the Indians went off a short distance to consult to- gether. Soon three of them started for the field in the direction of the cattle, and in a few minutes James W. Hunt started with a lariat to get lois horse. Charles, a son of Suit-Sub-Soc-Its or St. John, followed him on horse-back ; he kept telling him to go ahead of him, asking what he was afraid of, Hunt kept turning his head occasionally towards him, as though being apprehensive of danger, they got nearly a mile from the fort when Charles told him to look at the stock. He did so, raising himself on tip-toe. That instant Charles shot him, then shouted to an- other Indian, not far off, to run and take the horses. The ball entered Hunt’s back, ranging downward about one and a half inches from the back bone, on the left side, and four inches from the small of the back. This happened about half past twelve o ‘clock. Ephraim Wight and Sheldon B. Cutler were herding the stock. The Indians left and went across the river, Cutler came to the fort on horse-back and told what had happened. President Billings jumped on behind him. Peter Stubbs followed, and while John Clark and another followed with water and re- turned to the fort, Clinton Williams started on horse back after the stock. The boys carried Hunt in a blanket; but before they got within one fourth of a mile of the fort, the Indians re-crossed the river and came charging towards the boys and stock, raising a war whoop. Wm. M. Sterrett, Sheldon B. Cutler and Clark A. Huntington acted as rear guard to the boys who were carrying Hunt and fired upon the Indians who had fired some eight or ten guns before our boys commenced shooting. President Billings was wounded by a ball passing through the fore finger of his right hand. The bullets whistled briskly all around. The men arrived safely with the wounded man and the horses and cattle were taken inside the corral, except those the Indians had driven off. Every man was engaged. Soon one of the Indians set fire to our hay stacks which were adjoining the north end of the corral ; they were entirely consumed, as also the corn, and it took five or six men steady to carry water to save the corral logs, so as to keep what stock we had on the inside. The firing was kept up by the Indians till after dark. We succeeded in saving the corral, although some of the logs were nearly consumed. Seven Indians were seen to leave, Charles at their head, going to the mountains. The day previous (Saturday) two of the boys, Edward Edwards and William Behunin went hunting, expecting to return Sunday afternoon, Captain Capsium, a Tampa Ute, came down to the corner of the fort and corral and talked to Clark A. Huntington for some time when a few more Indians came. They said we had killed two or three of them and wounded as many, and they would not be satisfied till they had killed two more ” Mormons. ” They at first denied having killed the two boys who were out hunting and wanted bread. We gave them all we had. The Indians had turned the water off from us, They finally acknowledged killing the two boys out hunting. Hunt expired the following day.

Early in the morning of Monday, Sept. 24th the Indians came to the fort and said they were glad that three Mormons had been killed ; they had killed the two boys as they were coming down the mountain. Thus three of our boys were killed. Three Indians had also been killed and three others wounded who would die. It was now thought best to move out right away, or we should all die, as the Indians had sent runners out into the mountains for help. We packed up and without breakfast left about eleven o ‘clock in the morning, leaving fifteen head of horses twenty-four head of cattle with a calf, besides six head which we gave the Indians. When we got to the north side of Grand river, a brother of St. John and uncle to Charles, the leader, came to us. Clark A. Huntington told him all that had taken place, and what we had left behind. He said it was too bad, but he was only one against many. He said we should have our cattle, and he would see that the bodies of the boys who had been killed were taken care of and buried. Together with his sons he went to the fort and talked to the Indians. He had some difficulty with them, when they began shooting the cattle. The friendly Indians who succeeded in driving away fifteen head of cattle, delivered to us eight cows and kept seven that were wounded. They butchered three head and brought us a little of the Meat.

We arrived in Manti, Sunday Sept. 30th, between 4 and 5 o’clock p. m. John McEwan who was left behind the last morning driving his pony which was tired, some three miles from where we started, got bewildered and lost his way. The trail being dim and not very easy to follow, left all he had except his gun, and traveled eating nothing from Saturday night the 27 till Wednesday forenoon the 3rd of October about eleven o’clock a. m. when he was met by three men, viz: Nathaniel Beach, John Lowry, jr. both of Manti and Lyman A. Woods of Provo, and two Indians belonging to Arrapeen’s band who left Manti on Tuesday night at half past ten o ‘clock in pursuit of him. They arrived at Manti Thursday morning 7 :30 o ‘clock.