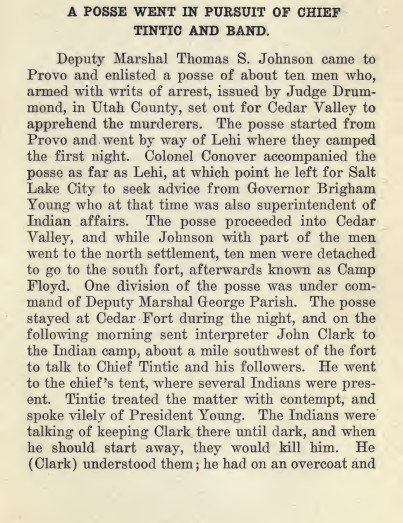 A Posse Went in Pursuit of Chief Tintic and Band 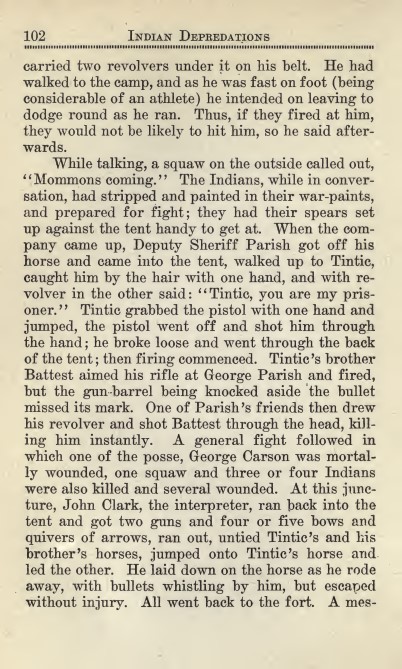 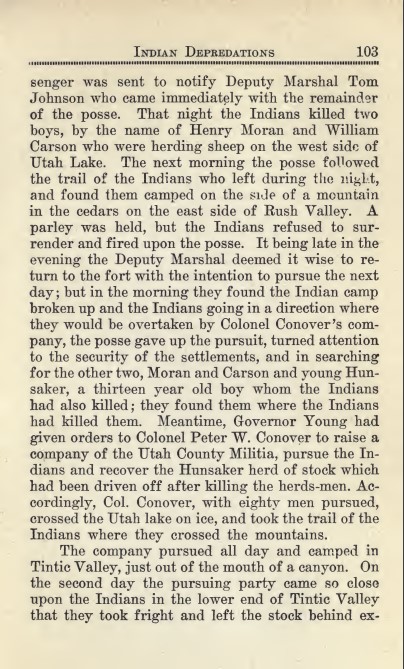 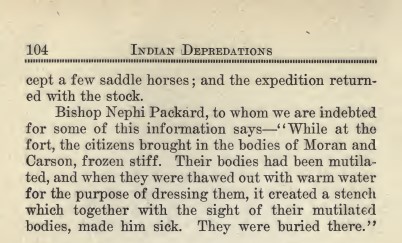 A POSSE WENT IN PURSUIT OF CHIEF TINTIC AND BAND.

Deputy Marshal Thomas S. Johnson came to Provo and enlisted a posse of about ten men who, armed with writs of arrest, issued by Judge Drummond, in Utah County, set out for Cedar Valley to apprehend the murderers. The posse started from Provo and went by way of Lehi where they camped the first night. Colonel Conover accompanied the posse as far as Lehi, at which point he left for Salt Lake City to seek advice from Governor Brigham Young who at that time was also superintendent of Indian affairs. The posse proceeded into Cedar Valley, and while Johnson with part of the men went to the north settlement, ten men were detached to go to the south fort, afterwards known as Camp Floyd. One division of the posse was under com- mand of Deputy Marshal George Parish. The posse stayed at Cedar Fort during the night, and on the following morning sent interpreter John Clark to the Indian camp, about a mile southwest of the fort to talk to Chief Tintic and his followers. He went to the chief’s tent, where several Indians were present. Tintic treated the matter with contempt, and spoke vilely of President Young. The Indians were talking of keeping Clark there until dark, and when he should start away, they would kill him. He (Clark) understood them; he had on an overcoat and carried two revolvers under it on his belt. He had walked to the camp, and as he was fast on foot (being considerable of an athlete) he intended on leaving to dodge round as he ran. Thus, if they fired at him, they would not be likely to hit him, so he said afterwards.

While talking, a squaw on the outside called out, ” Mommons coming. ‘ ‘ The Indians, while in conversation, had stripped and painted in their war-paints, and prepared for fight; they had their spears set up against the tent handy to get at. When the com- pany came up, Deputy Sheriff Parish got off his horse and came into the tent, walked up to Tintic, caught him by the hair with one hand, and with re- volver in the other said: “Tintic, you are my pris- oner. ‘ ‘ Tintic grabbed the pistol with one hand and jumped, the pistol went off and shot him through the hand ; he broke loose and went through the back of the tent ; then firing commenced. Tintic ‘s brother Battest aimed his rifle at George Parish and fired, but the gun -barrel being knocked aside the bullet missed its mark. One of Parish’s friends then drew his revolver and shot Battest through the head, kill- ing him instantly. A general fight followed in which one of the posse, George Carson was mortally wounded, one squaw and three or four Indians were also killed and several wounded. At this juncture, John Clark, the interpreter, ran back into the tent and got two guns and four or five bows and quivers of arrows, ran out, untied Tintic ‘s and his brother’s horses, jumped onto Tintic’s horse arid led the other. He laid down on the horse as he rode away, with bullets whistling by him, but escaped without injury. All went back to the fort. A mes- senger was sent to notify Deputy Marshal Tom Johnson who came immediately with the remainder of the posse. That night the Indians killed two boys, by the name of Henry Moran and William Carson who were herding sheep on the west side of Utah Lake. The next morning the posse followed the trail of the Indians who left during the ni&l-t, and found them camped on the side of a mountain in the cedars on the east side of Bush Valley. A parley was held, but the Indians refused to sur- render and fired upon the posse. It being late in the evening the Deputy Marshal deemed it wise to re- turn to the fort with the intention to pursue the next day ; but in the morning they found the Indian camp broken up and the Indians going in a direction where they would be overtaken by Colonel Conover ‘s company, the posse gave up the pursuit, turned attention to the security of the settlements, and in searching for the other two, Moran and Carson and young Hunsaker, a thirteen year old boy whom the Indians had also killed; they found them where the Indians had killed them. Meantime, Governor Young had given orders to Colonel Peter W. Conover to raise a company of the Utah County Militia, pursue the Indians and recover the Hunsaker herd of stock which had been driven off after killing the herds-men. Accordingly, Col. Conover, with eighty men pursued, crossed the Utah lake on ice, and took the trail of the Indians where they crossed the mountains.

The company pursued all day and camped in Tintic Valley, just out of the mouth of a canyon. On the second day the pursuing party came so close upon the Indians in the lower end of Tintic Valley that they took fright and left the stock behind ex- cept a few saddle horses ; and the expedition returned with the stock.

Bishop Nephi Packard, to whom we are indebted for some of this information says ” While at the fort, the citizens brought in the bodies of Moran and Carson, frozen stiff. Their bodies had been mutilated, and when they were thawed out with warm water for the purpose of dressing them, it created a stench which together with the sight of their mutilated bodies, made him sick. They were buried there.”