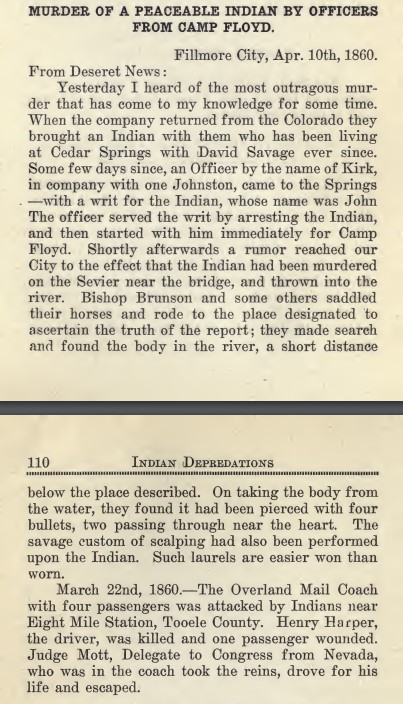 Murder of a Peaceable Indian by Officers from Camp Floyd

MURDER OF A PEACEABLE INDIAN BY OFFICERS FROM CAMP FLOYD.

Yesterday I heard of the most outragous murder that has come to my knowledge for some time. When the company returned from the Colorado they brought an Indian with them who has been living at Cedar Springs with -David Savage ever since. Some few days since, an Officer by the name of Kirk, in company with one Johnston, came to the Springs with a writ for the Indian, whose name was John The officer served the writ by arresting the Indian, and then started with him immediately for Camp Floyd. Shortly afterwards a rumor reached our City to the effect that the Indian had been murdered on the Sevier near the bridge, and thrown into the river. Bishop Brunson and some others saddled their horses and rode to the place designated to a scertain the truth of the report ; they made search and found the body in the river, a short distance below the place described. On taking the body from the water, they found it had been pierced with four bullets, two passing through near the heart. The savage custom of scalping had also been performed upon the Indian. Such laurels are easier won than worn.

March 22nd, I860. The Overland Mail Coach with four passengers was attacked by Indians near Eight Mile Station, Tooele County. Henry Harper, the driver, was killed and one passenger wounded. Judge Mott, Delegate to Congress from Nevada, who was in the coach took the reins, drove for his life and escaped.