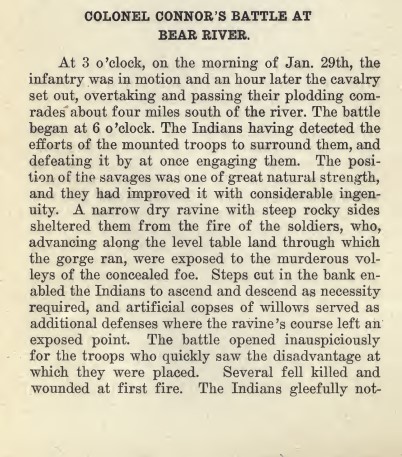 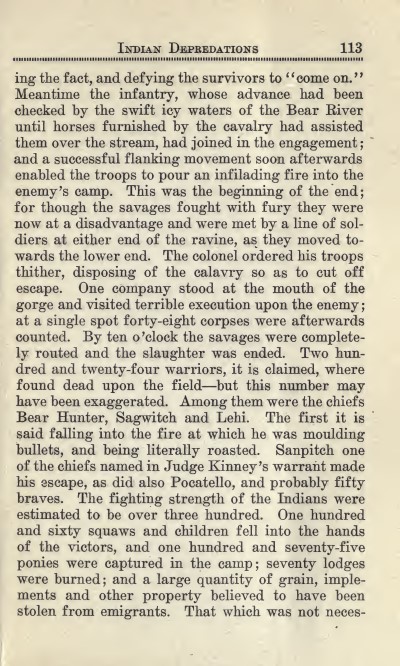 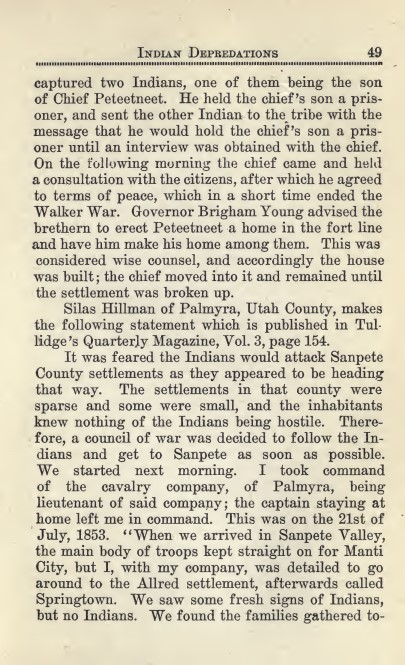 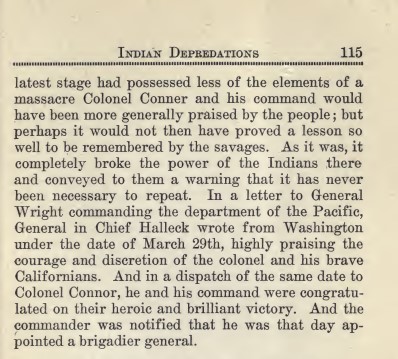 FURTHER PARTICULARS OF THE WALKER WAR GIVEN BY JOHN W. BERRY OF PALMYRA, UTAH COUNTY.

“On- the 19th of July 1853 the Indians killed Alexander Keele at Payson and commenced what is called the Walker War. On the 20th of July, Colonel Conover, from Provo, in command of a company of militia known as the Nauvoo Legion, called at Palmyra and asked for volunteers to join his company and defend the settlements not provided with sufficient guards. Major Stephen Markham, John W. Berry and fifteen others went with him as far south as Manti. Colonel Conover, wishing to send a message to President Brigham Young, at Salt Lake City, to ask for his advice, appointed Clark Roberts, of Provo, and John W. Berry as messengers to the President.

These messengers left Manti at 4 o’clock P. M. on the 23rd of July 1853, and arrived at Summit Creek, (now Santaquin) about 10 A. M. on the fol- lowing day. On their arrival they found the inhabitants had all moved to Payson for safety and that the town was in the possession of the Indians. While riding along through the streets of the deserted set- tlement, with no thought of the Indians being in full possession of the same, they were fired on by twenty one Indians, from a house in which they were concealed. Clark Roberts was shot through the right shoulder and John W. Berry in the left wrist. Six or seven Indians pursued the two white men on horseback to Spring Lake, where the Payson cow herd was stationed under a guard, consisting of five or six men. The Indians seeing this guard gave up the chase and started back into the mountains. The wounded men went on to Payson, where their wounds were dressed, and in the afternoon they were con- veyed to their homes. When the messengers arrived at Palmyra, the citizens were camped in the school house.

On July 23rd, 1853, W. S. Berry and Charles Price, who were on guard discovered Indians at- tempting to steal cattle, and the savages commenced firing upon the guards, Charles Price was hit in the right thigh by a bullet, which made a very severe flesh wound. For fear of further Indian hostilities the people from the upper settlement all moved to Palmyra where they spent the winter of 1853-54. Indians stole about fifty or sixty head of cattle, among which were a number of oxen, and took them up Spanish Fork Canyon to the Warm Springs, where they camped all winter and fed upon the stolen stock.

In February, 1854, Captain Hancock of Payson, captured two Indians, one of them being the son of Chief Peteetneet. He held the chief ‘s son a prisoner, and sent the other Indian to the tribe with the message that he would hold the chief’s son a pris- oner until an interview was obtained with the chief. On the following morning the chief came and held a consultation with the citizens, after which he agreed to terms of peace, which in a short time ended the Walker War. Governor Brigham Young advised the brethern to erect Peteetneet a home in the fort line and have him make his home among them. This was considered wise counsel, and accordingly the house was built ; the chief moved into it and remained until the settlement was broken up.

It was feared the Indians would attack Sanpete County settlements as they appeared to be heading that way. The settlements in that county were sparse and some were small, and the inhabitants knew nothing of the Indians being hostile. Therefore, a council of war was decided to follow the Indians and get to Sanpete as soon as possible. We started next morning. I took command of the cavalry company, of Palmyra, being lieutenant of said company; the captain staying at home left me in command. This was on the 21st of July, 1853. “When we arrived in Sanpete Valley, the main body of troops kept straight on for Manti City, but I, with my company, was detailed to go around to the Allred settlement, afterwards called Springtown. We saw some fresh signs of Indians, but no Indians. We found the families gathered to- gether and a board fort put up around them a rather flimsy fort to stop bullets. We camped with them that night, during which one or two Indians were seen skulking around. Our boys shot at them, but I do not think they hit them ; it raised the alarm however, and every man wr as at his post ready for a fight, but no Indians came.

We advised the few settlers of Springtown to move down to Manti City, but they said they could take care of themselves.

We had been ordered to make for the main army to report what we had discovered of the situation of affairs in that section of the country, therefore, the next morning we took up our line of march for Manti, where we arrived the same day in the afternoon, joined the main army consisting of about two hundred men under command of Colonel Markham and Conover.

“We stopped at Manti seven or eight days, during which time companies were scouting the country in every direction in search of Indians. One of our companies ran across a camp of thirty or forty Indians and had a brush with them. Some of the Indians were killed ; the balance retreated.

Another party of the Indians came down the canyon to the mill, a short distance above Manti, in the night. After this discovery was made, a strong guard was kept up in the mouth of the canyon. One night I had command of a company doing guard service and Captain Chidester had charge of another in the mill below us, where the road came down the canyon. It was a very steep place, and a thick undergrowth of young pines grew close to the road. We concealed ourselves along the road in this under- growth and watched all night for Indians, having planned to let the Indians pass us; and when they should reach the mill Captain Chidester’s company was to attack them and drive them back for us to attack them. Thus they would have been attacked both in the front and rear ; but we got no chance to put our plans into action, for the Indians never came.

” After we had been away about twelve days, we received orders from the Lieutenant-General to re- turn home. The first night after we left we encamped at the springs north of Nephi City. That night the Indians tried to drive off our horses, which were feeding, but our guard being strong around the horses prevented the Indians from getting them, and fired pretty lively for a short time ; the balance of the guard with the camp surrounded the horses and drove them into a corral, which had been left standing when the inhabitants evacuated the settle- ment and took shelter in the city of Nephi. The next morning we saw some blood, but no dead Indians. Next day we reached Palmyra. During the summer and fall we had to keep up a vigilant watch against the Indians. While we were in Sanpete, Indians were lurking around Palmyra. One man by the name of Price was shot in the knee; also one of our men (John W. Berry), sent home with an express, was shot at Summit Creek through the hand. The Indians drove off the Allred settlement’s stock, and during the season killed several men in Sanpete. One man was also killed at Summit Creek.

We had another expedition, Sept 26th, of a couple of days after Indians at Salt Greek, in Goshen Valley. We came to an Indian camp just at day break and took the savages by surprise. As they begged for peace, we told them if they would give up their arms and go to the settlements, we would not hurt them. We dallied with them for some time, as they did not like to give up their arms, that being the last thing an Indian will part with. But at last Colonel Markham gave them five minutes to decide. Not complying with his order the colonel gave the order for our company to attack. The Indians re- turned the fire very lively for some time, but our men pressed them so hard that they soon silenced the firing of the Indians. Those of them that were not killed retreated into a cane swamp and got away. Casualties on our side were small, considering the smartness of fire of the Indians. One man (Bishop Charles Hancock) was slightly wounded in the head, and one horse shot in the hip. The Indians being in the cane and in the swamp dragged their dead in there; Consequently we could not tell how many were killed.

After peace was made they told us we only wounded two or three; but they reported at Nephi that we killed nineteen or twenty of them.

They made a haul of sixty or seventy head of cattle from our place late in the fall and during the fore part of the winter, while the cattle were running two or three miles up the creek from Palmyra; the owners thought it was so late in the fall that there was no danger of Indians disturbing them ; but they nevertheless, came down from the canyon over to Palmyra and took some out of our corrals, and took all they could find up the creek and got away with them to Uintah Valley. After peace was made they returned what they had not killed and eaten.