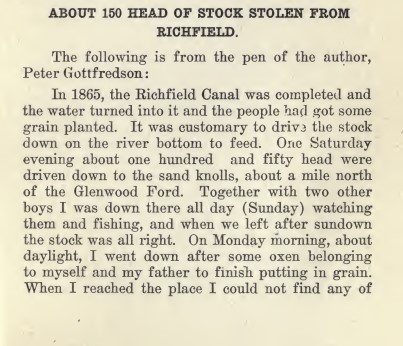 About 150 Head of Stock Stolen from Richfield 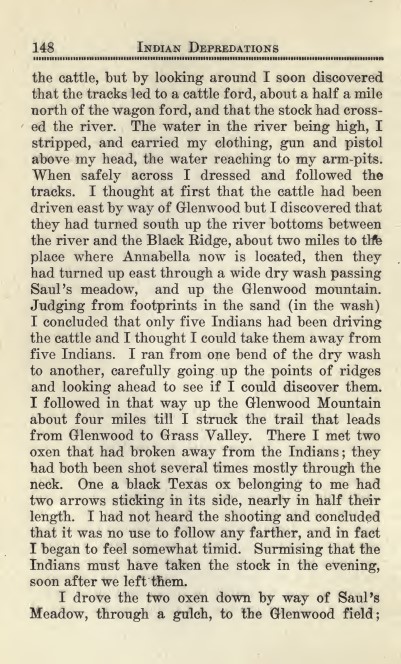 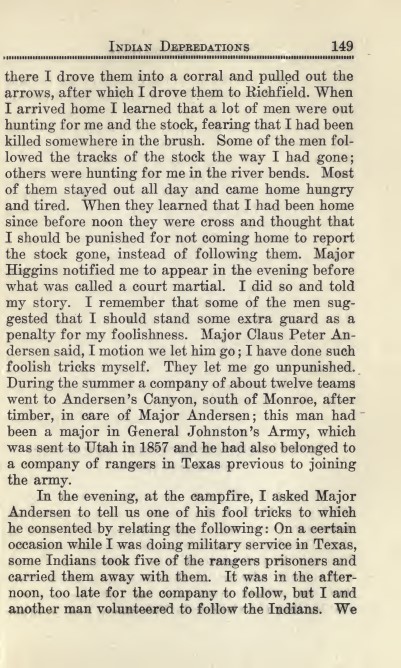 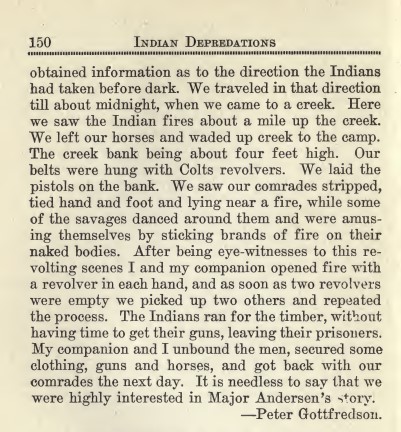 ABOUT 150 HEAD OF STOCK STOLEN FROM RICHFIELD.

The following is from the pen of the author, Peter Gottfredson:

In 1865, the Richfield Canal was completed and the water turned into it and the people had got some grain planted. It was customary to drive the stock down on the river bottom to feed. One Saturday evening about one hundred and fifty head were driven down to the sand knolls, about a mile north of the Glenwood Ford. Together with two other boys I was down there all day (Sunday) watching them and fishing, and when we left after sundown the stock was all right. On Monday morning, about daylight, I went down after some oxen belonging to myself and my father to finish putting in grain. When I reached the place I could not find any of the cattle, but by looking around I soon discovered that the tracks led to a cattle ford, about a half a mile north of the wagon ford, and that the stock had cross- ed the river. The water in the river being high, I stripped, and carried my clothing, gun and pistol above my head, the water reaching to my arm-pits. When safely across I dressed and followed the tracks. I thought at first that the cattle had been driven east by way of Glenwood but I discovered that they had turned south up the river bottoms between the river and the Black Ridge, about two miles to tftb place where Annabella now is located, then they had turned up east through a wide dry wash passing Saul’s meadow, and up the Glenwood mountain. Judging from footprints in the sand (in the wash) I concluded that only five Indians had been driving the cattle and I thought I could take them away from five Indians. I ran from one bend of the dry wash to another, carefully going up the points of ridges and looking ahead to see if I could discover them. I followed in that way up the Glenwood Mountain about four miles till I struck the trail that leads from Glenwood to Grass Valley. There I met two oxen that had broken away from the Indians ; they had both been shot several times mostly through the neck. One a black Texas ox belonging to me had two arrows sticking in its side, nearly in half their length. I had not heard the shooting and concluded that it was no use to follow any farther, and in fact I began to feel somewhat timid. Surmising that the Indians must have taken the stock in the evening, soon after we left them.

I drove the two oxen down by way of SauPs Meadow, through a gulch, to the Glenwood field; there I drove them into a corral and pulled out the arrows, after which I drove them to Richfield. When I arrived home I learned that a lot of men were out hunting for me and the stock, fearing that I had been killed somewhere in the brush. Some of the men fol- lowed the tracks of the stock the way I had gone; others were hunting for me in the river bends. Most of them stayed out all day and came home hungry and tired. When they learned that I had been home since before noon they were cross and thought that I should be punished for not coming home to report the stock gone, instead of following them. Major Higgins notified me to appear in the evening before what was called a court martial. I did so and told my story. I remember that some of the men suggested that I should stand some extra guard as a penalty for my foolishness. Major Glaus Peter Andersen said, I motion we let him go ; I have done such foolish tricks myself. They let me go unpunished. During the summer a company of about twelve teams went to Andersen’s Canyon, south of Monroe, after timber, in care of Major Andersen; this man had been a major in General Johnston’s Army, which was sent to Utah in 1857 and he had also belonged to a company of rangers in Texas previous to joining the army.

In the evening, at the campfire, I asked Major Andersen to tell us one of his fool tricks to which he consented by relating the following : On a certain occasion while I was doing military service in Texas, some Indians took five of the rangers prisoners and carried them away with them. It was in the afternoon, too late for the company to follow, but I and another man volunteered to follow the Indians. We obtained information as to the direction the Indians had taken before dark. We traveled in that direction till about midnight, when we came to a creek. Here we saw the Indian fires about a mile up the creek. We left our horses and waded up creek to the camp. The creek bank being about four feet high. Our belts were hung with Colts revolvers. We laid the pistols on the bank. We saw our comrades stripped, tied hand and foot and lying near a fire, while some of the savages danced around them and were amusing themselves by sticking brands of fire on their naked bodies. After being eye-witnesses to this re- volting scenes I and my companion opened fire with a revolver in each hand, and as soon as two revolvers were empty we picked up two others and repeated the process. The Indians ran for the timber, without having time to get their guns, leaving their prisoners. My companion and I unbound the men, secured some clothing, guns and horses, and got back with our comrades the next day. It is needless to say that we were highly interested in Major Andersen’s story.