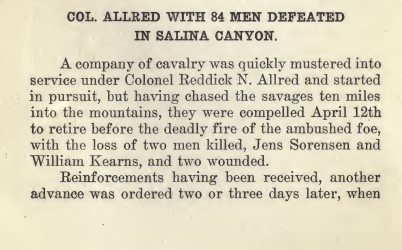 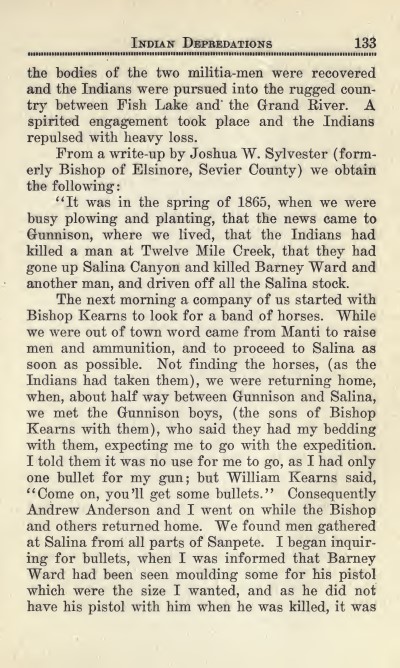 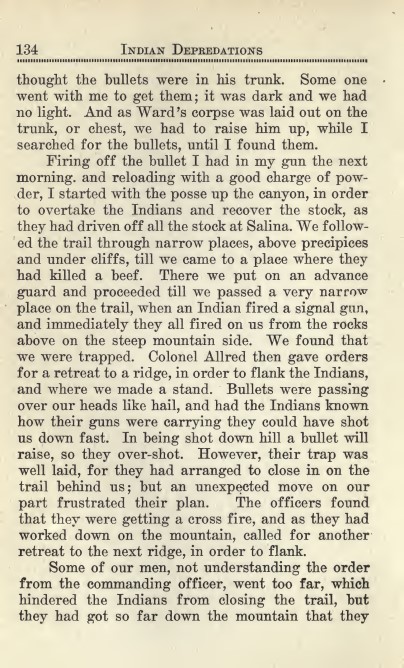 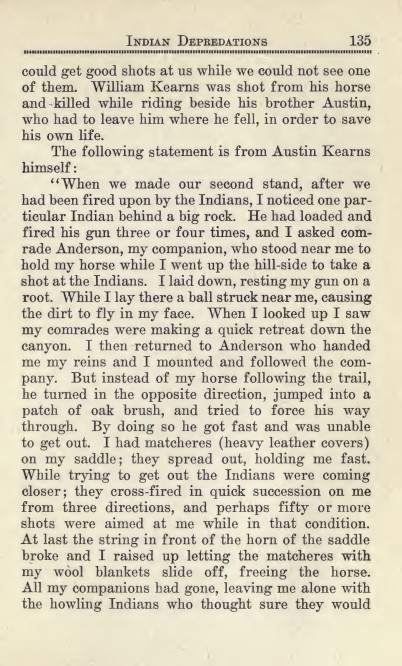 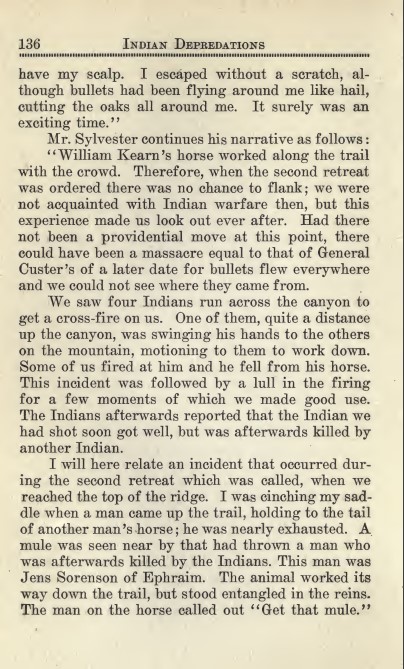 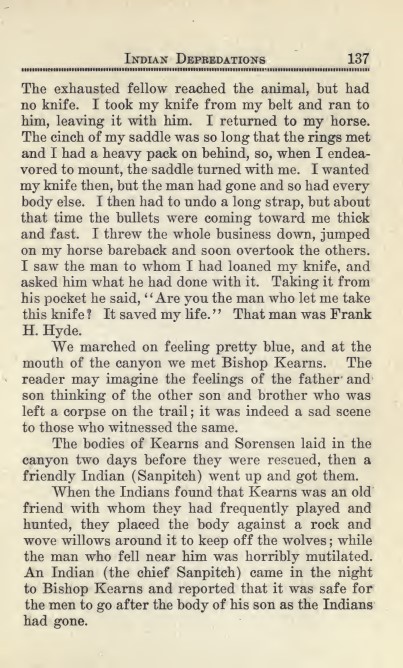 A company of cavalry was quickly mustered into service under Colonel Reddick N. Allred and started in pursuit, but having chased the savages ten miles into the mountains, they were compelled April 12th to retire before the deadly fire of the ambushed foe, with the loss of two men killed, Jens Sorensen and William Kearns, and two wounded.

Reinforcements having been received, another advance was ordered two or three days later, when the bodies of the two militia-men were recovered and the Indians were pursued into the rugged country between Fish Lake and’ the Grand River. A spirited engagement took place and the Indians repulsed with heavy loss.

From a write-up by Joshua W. Sylvester (formerly Bishop of Elsinore, Sevier County) we obtain the following:

“It was in the spring of 1865, when we were busy plowing and planting, that the news came to Gunnison, where we lived, that the Indians had killed a man at Twelve Mile Creek, that they had gone up Salina Canyon and killed Barney Ward and another man, and driven off all the Salina stock.

The next morning a company of us started with Bishop Kearns to look for a band of horses. While we were out of town word came from Manti to raise men and ammunition, and to proceed to Salina as soon as possible. Not finding the horses, (as the Indians had taken them), we were returning home, when, about half way between Gunnison and Salina, we met the Gunnison boys, (the sons of Bishop Kearns with them), who said they had my bedding with them, expecting me to go with the expedition. I told them it was no use for me to go, as I had only one bullet for my gun; but William Kearns said, “Come on, you’ll get some bullets. ” Consequently Andrew Anderson and I went on while the Bishop and others returned home. We found men gathered at Salina from all parts of Sanpete. I began inquiring for bullets, when I was informed that Barney Ward had been seen moulding some for his pistol which were the size I wanted, and as he did not have his pistol with him when he was killed, it was thought the bullets were in his trunk. Some one went with me to get them; it was dark and we had no light. And as Ward’s corpse was laid out on the trunk, or chest, we had to raise him up, while I searched for the bullets, until I found them.

Firing off the bullet I had in my gun the next morning, and reloading with a good charge of powder, I started with the posse up the canyon, in order to overtake the Indians and recover the stock, as they had driven off all the stock at Salina. We followed the trail through narrow places, above precipices and under cliffs, till we came to a place where they had killed a beef. There we put on an advance guard and proceeded till we passed a very narrow place on the trail, when an Indian fired a signal gun, and immediately they all fired on us from the rocks above on the steep mountain side. We found that we were trapped. Colonel Allred then gave orders for a retreat to a ridge, in order to flank the Indians, and where we made a stand. Bullets were passing over our heads like hail, and had the Indians known how their guns were carrying they could have shot us down fast. In being shot down hill a bullet will raise, so they over-shot. However, their trap was well laid, for they had arranged to close in on the trail behind us; but an unexpected move on our part frustrated their plan. The officers found that they were getting a cross fire, and as they had worked down on the mountain, called for another retreat to the next ridge, in order to flank.

Some of our men, not understanding the order from the commanding officer, went too far, which hindered the Indians from closing the trail, but they had got so far down the mountain that they could get good shots at us while we could not see one of them. William Kearns was shot from his horse and killed while riding beside his brother Austin, who had to leave him where he fell, in order to save his own life.

The following statement is from Austin Kearns himself :

“When we made our second stand, after we had been fired upon by the Indians, I noticed one particular Indian behind a big rock. He had loaded and fired his gun three or four times, and I asked comrade Anderson, my companion, who stood near me to hold my horse while I went up the hill-side to take a shot at the Indians. I laid down, resting my gun on a root. While I lay there a ball struck near me, causing the dirt to fly in my face. When I looked up I saw my comrades were making a quick retreat down the canyon. I then returned to Anderson who handed me my reins and I mounted and followed the company. But instead of my horse following the trail, he turned in the opposite direction, jumped into a patch of oak brush, and tried to force his way through. By doing so he got fast and was unable to get out. I had matcheres (heavy leather covers) on my saddle; they spread out, holding me fast. While trying to get out the Indians were coming closer; they cross-fired in quick succession on me from three directions, and perhaps fifty or more shots were aimed at me while in that condition. At last the string in front of the horn of the saddle broke and I raised up letting the matcheres with my wool blankets slide off, freeing the horse. All my companions had gone, leaving me alone with the howling Indians who thought sure they would have my scalp. I escaped without a scratch, al- though bullets had been flying around me like hail, cutting the oaks all around me. It surely was an exciting time.”

“William Kearn’s horse worked along the trail with the crowd. Therefore, when the second retreat was ordered there was no chance to flank ; we were not acquainted with Indian warfare then, but this experience made us look out ever after. Had there not been a providential move at this point, there could have been a massacre equal to that of General Ouster’s of a later date for bullets flew everywhere and we could not see where they came from.

We saw four Indians run across the canyon to get a cross-fire on us. One of them, quite a distance up the canyon, was swinging his hands to the others on the mountain, motioning to them to work down. Some of us fired at him and he fell from his horse. This incident was followed by a lull in the firing for a few moments of which we made good use. The Indians afterwards reported that the Indian we had shot soon got well, but was afterwards killed by another Indian.

I will here relate an incident that occurred during the second retreat which was called, when we reached the top of the ridge. I was cinching my saddle when a man came up the trail, holding to the tail of another man’s horse ; he was nearly exhausted. A mule was seen near by that had thrown a man who was afterwards killed by the Indians. This man was Jens Sorenson of Ephraim. The animal worked its way down the trail, but stood entangled in the reins. The man on the horse called out “Get that mule.” The exhausted fellow reached the animal, but had no knife. I took my knife from my belt and ran to him, leaving it with him. I returned to my horse. The cinch of my saddle was so long that the rings met and I had a heavy pack on behind, so, when I endeavored to mount, the saddle turned with me. I wanted my knife then, but the man had gone and so had every body else. I then had to undo a long strap, but about that time the bullets were coming toward me thick and fast. I threw the whole business down, jumped on my horse bareback and soon overtook the others. I saw the man to whom I had loaned my knife, and asked him what he had done with it. Taking it from his pocket he said, ” Are you the man who let me take this knife I It saved my life. ‘ ‘ That man was Frank H. Hyde.

We marched on feeling pretty blue, and at the mouth of the canyon we met Bishop Kearns. The reader may imagine the feelings of the father and son thinking of the other son and brother who was left a corpse on the trail ; it was indeed a sad scene to those who witnessed the same.

The bodies of Kearns and Sorensen laid in the canyon two days before they were rescued, then a friendly Indian (Sanpitch) went up and got them.

When the Indians found that Kearns was an old friend with whom they had frequently played and hunted, they placed the body against a rock and wove willows around it to keep off the wolves ; while the man who fell near him was horribly mutilated. An Indian (the chief Sanpitch) came in the night to Bishop Kearns and reported that it was safe for the men to go after the body of his son as the Indians had gone.