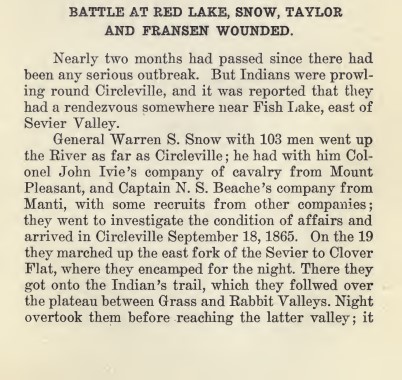 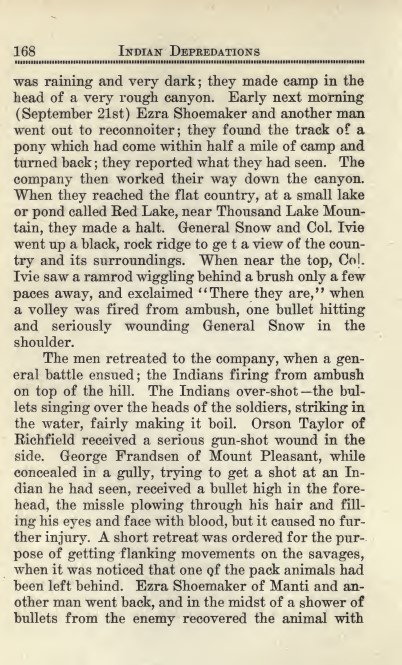 Nearly two months had passed since there had been any serious outbreak. But Indians were prowling round Circleville, and it was reported that they had a rendezvous somewhere near Fish Lake, east of Sevier Valley.

General Warren S. Snow with 103 men went up the River as far as Circleville ; he had with him Colonel John Ivie’s company of cavalry from Mount Pleasant, and Captain N. S. Beache ‘s company from Manti, with some recruits from other companies; they went to investigate the condition of affairs and arrived in Circleville September 18, 1865. On the 19 they marched up the east fork of the Sevier to Clover Flat, where they encamped for the night. There they got onto the Indian’s trail, which they follwed over the plateau between Grass and Rabbit Valleys. Night overtook them before reaching the latter valley; it was raining and very dark; they made camp in the head of a very rough canyon. Early next morning (September 21st) Ezra Shoemaker and another man went out to reconnoiter; they found the track of a pony which had come within half a mile of camp and turned back ; they reported what they had seen. The company then worked their way down the canyon. When they reached the flat country, at a small lake or pond called Bed Lake, near Thousand Lake Mountain, they made a halt. General Snow and Col. Ivie went up a black, rock ridge to ge t a view of the country and its surroundings. When near the top, Col. Ivie saw a ramrod wiggling behind a brush only a few paces away, and exclaimed ” There they are,” when a volley was fired from ambush, one bullet hitting and seriously wounding General Snow in the shoulder.

The men retreated to the company, when a general battle ensued; the Indians firing from ambush on top of the hill. The Indians over-shot the billets singing over the heads of the soldiers, striking in the water, fairly making it boil. Orson Taylor of Richfield received a serious gun-shot wound in the side. George Frandsen of Mount Pleasant, while concealed in a gully, trying to get a shot at an Indian he had seen, received a bullet high in the forehead, the missle plowing through his hair and fill- ing his eyes arid face with blood, but it caused no further injury. A short retreat was ordered for the purpose of getting flanking movements on the savages, when it was noticed that one o.f the pack animals had been left behind. Ezra Shoemaker of Manti and an- other man went back, and in the midst of a shower of bullets from the enemy recovered the animal with the pack. The fighting continued till night and several Indians were killed. The militia crossed back over the mountain in the night to Grass Valley and made camp. Next day they marched down King’s Meadow Canyon to Glendwood, where they separated and returned to their respective homes.