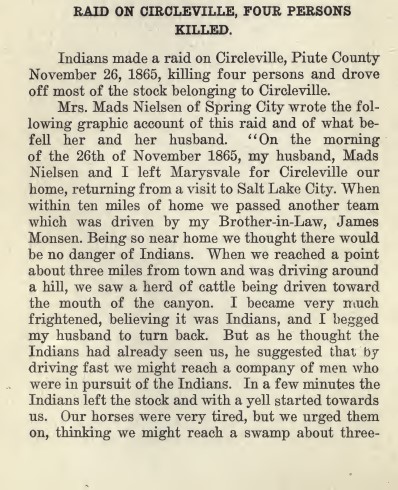 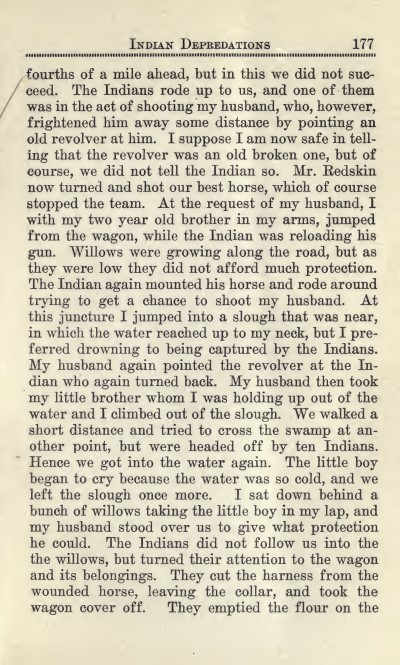 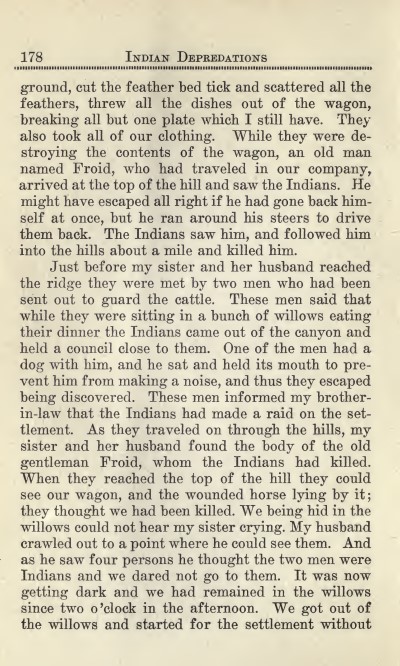 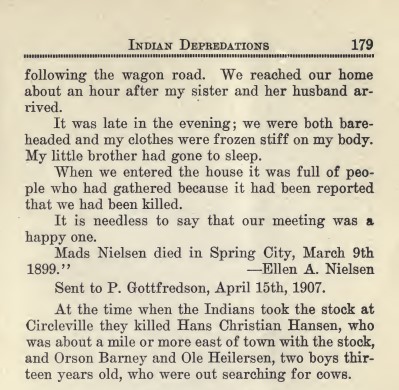 Indians made a raid on Circleville, Piute County November 26, 1865, killing four persons and drove off most of the stock belonging to Circleville.

Mrs. Mads Nielsen of Spring City wrote the fol- lowing graphic account of this raid and of what befell her and her husband. “On the morning of the 26th of November 1865, my husband, Mads Nielsen and I left Marysvale for Circleville our home, returning from a visit to Salt Lake City. When within ten miles of home we passed another team which was driven by my Brother-in-Law, James Monsen. Being so near home we thought there would be no danger of Indians. When we reached a point about three miles from town and was driving around a hill, we saw a herd of cattle being driven toward the mouth of the canyon. I became very much frightened, believing it was Indians, and I begged my husband to turn back. But as he thought the Indians had already seen us, he suggested that by driving fast we might reach a company of men who were in pursuit of the Indians. In a few minutes the Indians left the stock and with a yell started towards us. Our horses were very tired, but we urged them on, thinking we might reach a swamp about three- fourths of a mile ahead, but in this we did not succeed. The Indians rode up to us, and one of them was in the act of shooting my husband, who, however, frightened him away some distance by pointing an old revolver at him. I suppose I am now safe in tell- ing that the revolver was an old broken one, but of course, we did not tell the Indian so. Mr. Redskin now turned and shot our best horse, which of course stopped the team. At the request of my husband, I with my two year old brother in my arms, jumped from the wagon, while the Indian was reloading his gun. Willows were growing along the road, but as they were low they did not afford much protection. The Indian again mounted his horse and rode around trying to get a chance to shoot my husband. At this juncture I jumped into a slough that was near, in which the water reached up to my neck, but I preferred drowning to being captured by the Indians. My husband again pointed the revolver at the Indian who again turned back. My husband then took my little brother whom I was holding up out of the water and I climbed out of the slough. We walked a short distance and tried to cross the swamp at an- other point, but were headed off by ten Indians. Hence we got into the water again. The little boy began to cry because the water was so cold, and we left the slough once more. I sat down behind a bunch of willows taking the little boy in my lap, and my husband stood over us to give what protection he could. The Indians did not follow us into the the willows, but turned their attention to the wagon and its belongings. They cut the harness from the wounded horse, leaving the collar, and took the wagon cover off. They emptied the flour on the ground, cut the feather bed tick and scattered all the feathers, threw all the dishes out of the wagon, breaking all but one plate which I still have. They also took all of our clothing. While they were destroying the contents of the wagon, an old man named Froid, who had traveled in our company, arrived at the top of the hill and saw the Indians. He might have escaped all right if he had gone back himself at once, but he ran around his steers to drive them back. The Indians saw him, and followed him into the hills about a mile and killed him.

Just before my sister and her husband reached the ridge they were met by two men who had been sent out to guard the cattle. These men said that while they were sitting in a bunch of willows eating their dinner the Indians came out of the canyon and held a council close to them. One of the men had a dog with him, and he sat and held its mouth to prevent him from making a noise, and thus they escaped being discovered. These men informed my brotherin-law that the Indians had made a raid on the set- tlement. As they traveled on through the hills, my sister and her husband found the body of the old gentleman Froid, whom the Indians had killed. When they reached the top of the hill they could see our wagon, and the wounded horse lying by it; they thought we had been killed. We being hid in the willows could not hear my sister crying. My husband crawled out to a point where he could see them. And as he saw four persons he thought the two men were Indians and we dared not go to them. It was now getting dark and we had remained in the willows since two o’clock in the afternoon. We got out of the willows and started for the settlement without following the wagon road. We reached our home about an hour after my sister and her husband arrived.

It was late in the evening; we were both bareheaded and my clothes were frozen stiff on my body. My little brother had gone to sleep.

When we entered the house it was full of people who had gathered because it had been reported that we had been killed.

It is needless to say that our meeting was a happy one.

At the time when the Indians took the stock at Circleville they killed Hans Christian Hansen, who was about a mile or more east of town with the stock, and Orson Barney and Ole Heilersen, two boys thirteen years old, who were out searching for cows.