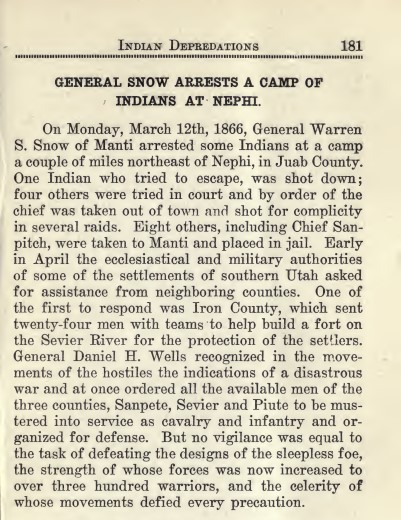 General Snow Arrests a Camp of Indians at Nephi

GENERAL SNOW ARRESTS A GAMP OF INDIANS AT NEPHI.

On Monday, March 12th, 1866, General Warren S. Snow of Manti arrested some Indians at a camp a couple of miles northeast of Nephi, in Juab County. One Indian who tried to escape, was shot down; four others were tried in court and by order of the chief was taken out of town and shot for complicity in several raids. Eight others, including Chief Sanpitch, were taken to Manti and placed in jail. Early in April the ecclesiastical and military authorities of some of the settlements of southern Utah asked for assistance from neighboring counties. One of the first to respond was Iron County, which sent twenty-four men with teams to help build a fort on the Sevier River for the protection of the set Hers. General Daniel H. Wells recognized in the movements of the hostiles the indications of a disastrous war and at once ordered all the available men of the three counties, Sanpete, Sevier and Piute to be mustered into service as cavalry and infantry and or- ganized for defense. But no vigilance was equal to the task of defeating the designs of the sleepless foe, the strength of whose forces was now increased to over three hundred warriors, and the celerity of whose movements defied every precaution.