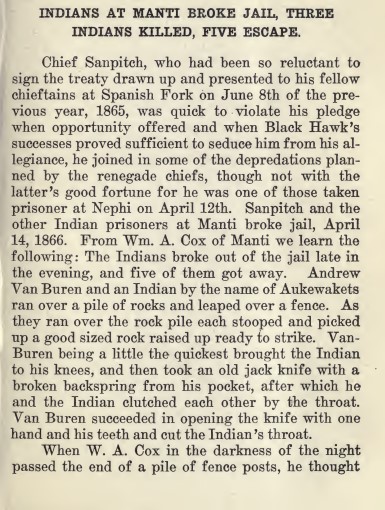 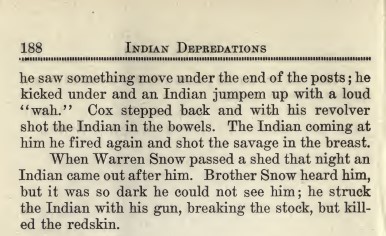 Chief Sanpitch, who had been so reluctant to sign the treaty drawn up and presented to his fellow chieftains at Spanish Fork on June 8th of the previous year, 1865, was quick to violate his pledge when opportunity offered and when Black Hawk’s successes proved sufficient to seduce him from his al- legiance, he joined in some of the depredations planned by the renegade chiefs, though not with the latter ‘s good fortune for he was one of those taken prisoner at Nephi on April 12th. Sanpitch and the other Indian prisoners at Manti broke jail, April 14, 1866. From Wm. A. Cox of Manti we learn the following: The Indians broke out of the jail late in the evening, and five of them got away. Andrew Van Buren and an Indian by the name of Aukewakets ran over a pile of rocks and leaped over a fence. As they ran over the rock pile each stooped and picked up a good sized rock raised up ready to strike. VanBuren being a little the quickest brought the Indian to his knees, and then took an old jack knife with a broken backspring from his pocket, after which he and the Indian clutched each other by the throat. Van Buren succeeded in opening the knife with one hand and his teeth and cut the Indian’s throat.

When W. A. Cox in the darkness of the night passed the end of a pile of fence posts, he thought he saw something move under the end of the posts ; he kicked under and an Indian jumpem up with a loud “wah.” Cox stepped back and with his revolver shot the Indian in the bowels. The Indian coming at him he fired again and shot the savage in the breast.

When Warren Snow passed a shed that night an Indian came out after him. Brother Snow heard him, but it was so dark he could not see him; he struck the Indian with his gun, breaking the stock, but kill- ed the redskin.