Killing of Joseph and Robert Berry and Wife as Stated by J. S. Adams and Wife

Museum Exhibits Utah History Killing of Joseph and Robert Berry and Wife as Stated by J. S. Adams and Wife 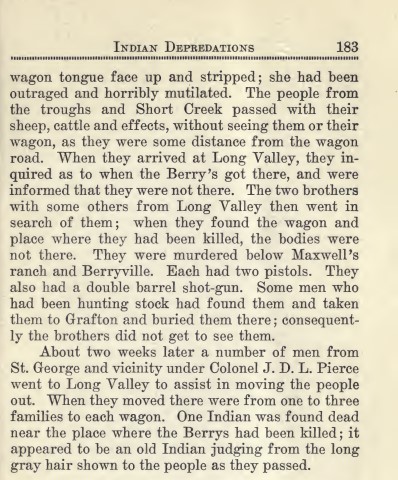 KILLING OF JOSEPH AND ROBERT BERRY AND WIFE AS STATED BY J. S. ADAMS AND WIFE.

Joseph and Robert Berry and the latter ‘s wife Isabella were on their way from Spanish Fork, Utah County, their former home, to Long Valley, April 2, 1866. When at Ezra Strong’s place, called the Troughs, in Kane County, they were asked to stay a few days, while the ranch people gathered up their stock, getting ready to leave they would go with the Berrys to Long Valley, but as they were in a hurry they did not stop.

Arriving at Short Creek, William Maxwell and family who lived there, advised them to stop, as they were also gathering their effects, and they would all go in together. The Berry’s declined and went on, their team consisting of a good pair of horses and a light wagon. They also had a plow and a few farm implements with them, and such supplies as they would need at their new home. When at the Cedar Ridge, two or three miles from Short Creek, they were attacked by Indians from the cedars and killed. When the bodies were subsequently found it appeared that Joseph Berry had been wounded in the leg, as a towel was wrapped around it. the travelers had un- doubtedly turned and driven back towards Short Creek, and had gone as far as the Big Sand Wash, where they were again attacked. It also appeared that one of the horses had been shot in the shoulder with an arrow, as the collar was found with an arrow point sticking through it about an inch and a half, which crippled the horse so that he was unable to pull; the other horse had cramped the wagon and there they had all been killed and their horses taken by the savages.

When found, Robert Berry was tied to the front wheel of the wagon with his face out, and was shot full of holes ; Joseph was found a short distance from the wagon. Robert Berry’s wife lay across the wagon tongue face up and stripped; she had been outraged and horribly mutilated. The people from the troughs and Short Creek passed with their sheep, cattle and effects, without seeing them or their wagon, as they were some distance from the wagon road. When they arrived at Long Valley, they inquired as to when the Berry’s got there, and were informed that they were not there. The two brothers with some others from Long Valley then went in search of them; when they found the wagon and place where they had been killed, the bodies were not there. They were murdered below Maxwell’s ranch and Berryville. Each had two pistols. They also had a double barrel shot-gun. Some men who had been hunting stock had found them and taken them to Grafton and buried them there; consequently the brothers did not get to see them.

About two weeks later a number of men from St. George and vicinity under Colonel J. D. L. Pierce went to Long Valley to assist in moving the people out. When they moved there were from one to three families to each wagon. One Indian was found dead near the place where the Berrys had been killed ; it appeared to be an old Indian judging from the long gray hair shown to the people as they passed.