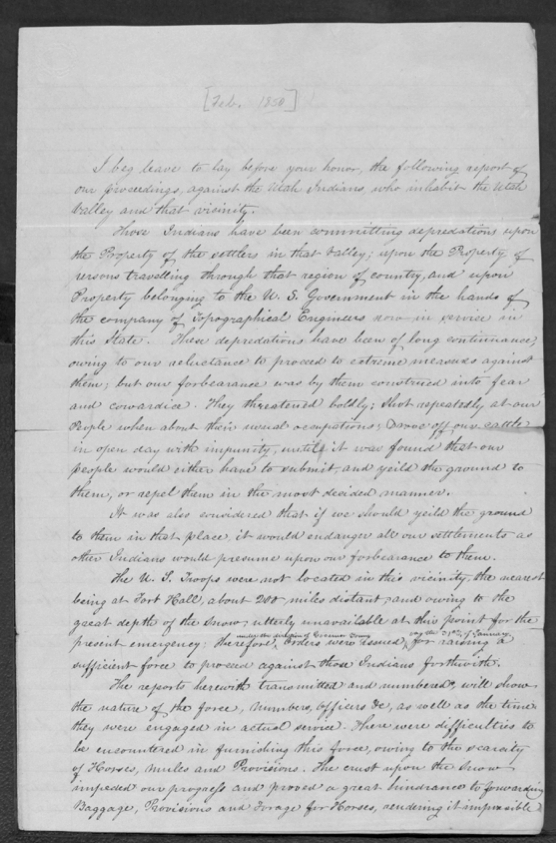 TRANSCRIPTION:  Daniel H. Wells, the Nauvoo Legion commander of the 1850 expedition, wrote his official report of the campaign to Brigham Young in February 1850 (original spellings)

I beg leave to lay before your honor, the following report of our proceedings, against the Utah Indians, who inhabit the Utah Valley and that vicinity.

Those Indians have been committing depredations upon the property of the settlers in that valley; upon the property of persons travelling through that region of country, and upon property belonging to the U.S. Government in the hands of the company of Topographical Engineers now in service in this state.  These depredations have been of long continuance, owing to our reluctance to proceed to extreme measures against them; but our forbearance was by them construed into fear and cowardice.  They threatened boldly; shot repeatedly at our people when about their usual occupations; drove off our cattle in open day with impunity, until it was found that our people would either have to submit, and yield the ground to them, or repel them in the most decided manner.

It was also considered that if we should yield the ground to them in that place, it would endanger all our settlements as other Indians would presume upon our forbearance to them.

The U.S. Troops were not located in this vicinity, the nearest being at Fort Hall, about 200 miles distant, and owing to the great depth of the snow, utterly unavailable at this point for the present emergency.  Therefore under the direction of Governor Young, orders were issued for the 31st of January for raising a sufficient force to proceed against those Indians forthwith.

The reports herewith transmitted and numbered will show the nature of the force, numbers, officers [a shorthand symbol that may mean “etc”], as well as the times they were engaged in actual service. There were difficulties to be encountered in furnishing this force, owing to the scarcity of horses, mules and provisions. The crust upon the snow impeded our progress and proved a great hindrance to forwarding baggage, provisions and forage for horses, rendering it impossible for teams to carry very heavy loads.  The Indians were found in their most secure retreats, upon those creeks where brush and ravines, or mountains and rocky canyons furnished them with ample natural defences.  They were also amply furnished with ammunition, and some good guns obtained from traders and emigrants, and poisoned arrows which they did not use.

In our engagements with them as our reports will show, only one man was killed, and five wounded, while of them 26 warriors are known to have been killed, five wounded, while some have died through exposure, want and fatigue, in being outed from their retreats at this inclement season of the year.  Many more are supposed to have been killed and wounded, but in accordance with Indian custom, carried away by them.  Thirteen horses have been taken from them, which will be returned to them, when it shall be seen that they will live in peace and refrain from their depredations.

Capt. Stansbury and officers connected with him have been [fully or freely] consulted with in all our operations against the Indians.  Lieutenant Howlands of the U.S. Army & Dr. [Blake] a physician in the employ of Capt. Stansbury accompanying us in the expedition. Their letters will also accompany this report.

The expense of this expedition though reasonable for the services, and the lowest customary prices for articles furnished, amounts to a considerable sum, and oppressive to be borne by infant settlements, where the untiring hand of industry, indefatigable perseverance, and all the energies of the people are requisite to reclaim and subdue the barren waste, build bridges, open roads through swampy plains or rocky passes in the mountains. We therefore request the payment of these expenses by the Government of the U.S.

We also suggest the propriety of the Government of the U.S. furnishing supplies, such as suitable arms, ammunition, camp equipage [a symbol that may mean “etc”], and pay for men and animals, when in actual service, who are located and intend to remain in this state as the proximity to the mines, and the distance of transportation is such, as will ever render any effort of the general Government to maintain a military post of good troops in this region quite uncertain and very expensive.

With sentiments of the highest esteem I submit these to your favorable consideration and remain Yours respectfully.

Killing of Joseph and Robert Berry and Wife as Stated by J. S. Adams and Wife

KILLING OF JOSEPH AND ROBERT BERRY AND WIFE AS STATED BY J. S. ADAMS AND WIFE.  Joseph and Robert Berry and the latter 's wife Isabella were on their way…
Hutchings Museum Institute 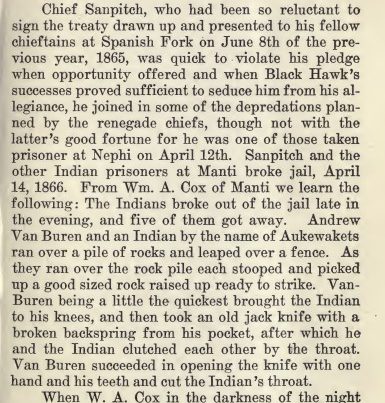 INDIANS AT MANTI BROKE JAIL, THREE INDIANS KILLED, FIVE ESCAPE.  Chief Sanpitch, who had been so reluctant to sign the treaty drawn up and presented to his fellow chieftains at…
Hutchings Museum Institute 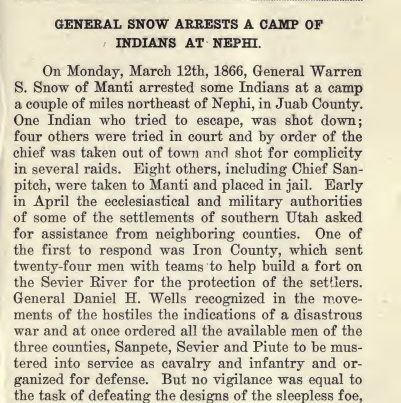 General Snow Arrests a Camp of Indians at Nephi

GENERAL SNOW ARRESTS A GAMP OF INDIANS AT NEPHI.  On Monday, March 12th, 1866, General Warren S. Snow of Manti arrested some Indians at a camp a couple of miles…
Hutchings Museum Institute